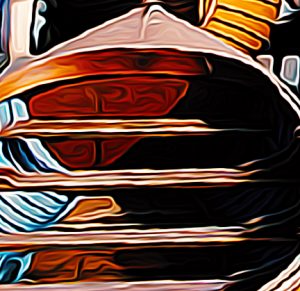 After I had finished giving my boat’s specifications to the designer man, he brought me over to his desk. It was filled with pieces of paper, each a different thickness, and some even completely transparent. Pencils were rolling around on the surface of the wood and measuring tools littered the foot of the lamp. I was beginning to get excited; it truly looked like an artist’s workspace.

The designer man pulled out an extra chair for me and asked me to sit down and describe exactly what I wanted my vinyl boat wrap to look like. I grinned and pointed at my face. The designer man only frowned in response. When he realised I was being serious, I got a bit nervous and shifted around in my seat. Would it not be possible to put my face in the vinyl? Would it cost too much for me to afford, based on the budget I had given him? I immediately began thinking about how I could trick him into giving it to me for free. I was a pirate, after all. Deception was my forte.

However, what the designer man said next convinced me to continue being nice. He said he had been a designer for nearly three decades, and over the course of his career, he had used everything from camo boat wrap, to paint, to pre-made vinyl boat wrap kits. He’d been part of a lot of strange designs, but he said he could tell I cared a lot about my boat and all he could do was offer his best advice. He said that I shouldn’t get my face on the hull, but rather select a design filled with all of my favourite ocean-related things, and then get it printed out in vinyl and get it attached to my boat by a professional. The designer man was so convincing that I couldn’t help but agree. We immediately set to work.