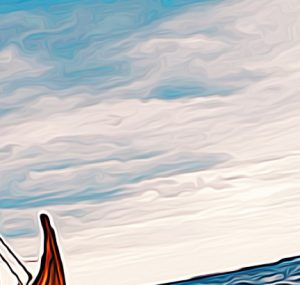 The journey to the shoreline ended rather abruptly. As their group passed beneath one final copse of trees, Gunnar had lifted his hands to the sky and shouted, “Behold!”

Lorcan’s eyes widened to the size of pudding bowls. He had watched his clan’s local artist sketch pictures of boats with chalk before, but seeing the real thing was another matter altogether. There were hundreds — thousands — of them moored at the docks, listing from side to side like spinning tops in the churning wind. Though they looked uniform from a distance, when Lorcan squinted, he could see some had been built from wood, while others still from aluminium and steel. A boat latch was visible on the ones closest to the docks — clearly, the burly man’s doing. What a pompous show-off.

After the hike down the cliff face, the vikings stood at the shoreline for a few moments, catching their breath on the salty breeze. Then Gunnar clapped and motioned for the boat shed. Lorcan went to follow after him, but Valdemar held his hand out.

“Wait here,” said Valdemar sternly. “And whatever you do, don’t touch the snapper racks. Melbourne doesn’t have many of them left.”

The other clan leaders seemed to have the same idea. They trickled into the shed without so much as a glance backwards, leaving Lorcan and the other junior members standing like lone dandelions on the sand. For a moment, there was nothing but a sharp, tense silence and the whirring of the wind.

“Well, that settles it,” a voice said.

Lorcan turned to find a blonde boy striding purposefully towards the waves.

“What are you doing?” Another boy called from Lorcan’s left.

The blonde boy spun around, a wicked smile splitting his face. He was up to his knees in saltwater now, the lull of the waves staining his furs with a creeping darkness. “I’m doing what none of you are brave enough to do.”

The boy reached up and grabbed hold of the nearest rope, pulling himself onto the fishing boat. Lorcan started forward. He had to stop him.