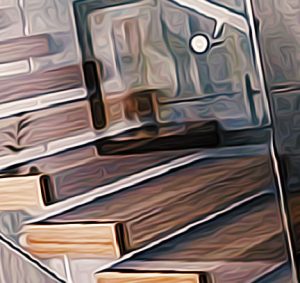 ‘I still can’t believe you got me to come with you,’ Sasha hissed at her friend. A floorboard creaked beneath them and she jumped. Leah turned around, pointing her torch beaming in Sasha’s face.

‘Look, I told you… there’s something here that you need to see,’ she whispered back, her face pale. ‘Something that everybody needs to see.’

Sasha frowned at her friend — what was going on? Leah had knocked on her door twenty minutes ago, hard enough that she’d almost cracked the glass. Repair around Melbourne might be cheap, but in their small town it sure wasn’t. When Sasha had finally got it open, Leah had insisted that she come with her… to the old McCreary house at the top of the hill.

Sasha had wanted to say no; it was the middle of the night, and all the neighbourhood kids — including Sasha — knew not to go near that house. But her friend had insisted, and she seemed scared, so Sasha had relented.

Now here she was, in a draughty, run-down mansion in the middle of the night trying not to imagine how many portraits were staring at her.

‘What is it?’ she asked Leah, once the bright spots had cleared from her vision. ‘What is it you were so desperate to show me?’

Sasha almost ran into the back of her, as Leah stopped suddenly.

‘We’re here,’ she whispered, almost to herself. Sasha followed the beam of her torchlight as it traced up the stair balustrade, trying to see what Leah was looking at.

Leah craned her neck to look back at Sasha. ‘I’m sorry,’ she said. ‘I know that it’s a school night and you have work tomorrow and everything, but I—I just had to know…

‘Had to know what?’ Sasha asked, starting to get concerned.

‘These stairs…’ Leah whispered, tracing them with her torch. ‘It’s just… do you think this style would suit my house? Mark doesn’t agree with me, but I think they’re gorgeous.’

Sasha glared at her friend for a good half-minute, then clicked her torch off and began to walk home.