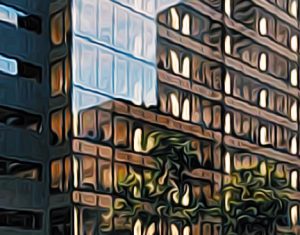 Transcript from an interview with Mark at Office Offices—conducted by Schlock Homes and assisted by Jon Whatson.

Mark: Who do I think smashed all the newly tinted glass on the third floor? Well, I’ll tell you who I think it was. Actually, I take that back. I know who did it. I don’t have any proof, but in the depths of my heart I know it was Richie. Richie has always had it out for that window, even before it was tinted.

Jon: What do you mean, he always had it out for the window? Has he been known to display violent tendencies when it comes to windows or glass in general?

Mark: You remember that Glass Smashing Bandit guy? Well, personally I always suspected that Richie was the Bandit. But then when you guys caught the Bandit and his face was shown on television, I figured that couldn’t be the case. But here’s the thing; Richie is always complaining about how much he wishes we didn’t have window tinting in this office. So, while I think he isn’t the Glass Smashing Bandit, what if he is the Tinted Glass Smashing Bandit?

Schlock: Listen, man. There’s no such thing as the Tinted Glass Smashing Bandit. This is a one-off act of vandalism. The Glass Smashing Bandit retired months ago, and there hasn’t been a string of glass-smashings since. But you think that Richie was the one to break this particular window? Honestly, what you just said doesn’t make the slightest bit of sense, so try to give it to us clearly. Why do you think Richie is responsible for smashing a fine window, which an office tinting business from Melbourne had just finished work on?

Mark: Okay, well you see, the reason I think Richie is behind it is that he sits by that window, and the sun used to glare in his eyes as he would work. I think he actually liked that, so he was annoyed when it got taken away. Makes sense, right?

Schlock: Absolutely not. You are an idiot. Shall we move on, Jon?

Jon: That would seem wise. He clearly just wants to throw his coworker under the bus. I’m stopping the tape recorder now.