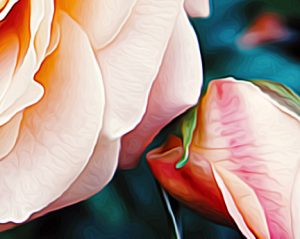 It has been five years, and still, Yasha has not returned from his quest to gather the pieces of the sacred rose of ultimate power. For the longest time, I waited eagerly by my window, anticipating his swift return. He would knock on my door and present the most beautiful hybrid tea rose to me, but alas, it never happened. I feared that Yasha had perished in his efforts to restore the rose. My heart ached for him, for what I had lost, despite the fact that we had only been on half a date. I thought that he really was the love of my life. Could I ever look at a rose again without suffering from my vivid memories of Yasha? Perhaps David Austin roses would forever be tainted. Climbing roses would never give me joy.

And then I realised that I literally couldn’t care less about that guy. Sure, it was very noble and brave—perhaps even a tad romantic—of Yasha to go on a big quest to gather the petals of this flower, but the thing is that I literally told him not to do it. I said repeatedly that it didn’t bother me. I could just buy some standard roses online and be done with it! But no, he didn’t listen, and he’s gone and probably gotten himself killed on this crazy quest. Instead, he could have just stayed with me, driven me home half a decade ago, and we’d be happily married with two children by now!

Today is actually the anniversary of that date, which is why I’m writing a blog post about it now. Oh, how life could have been different if he had actually listened to me, rather than letting his big ego and ridiculous hero complex get in the way. Well, it’s not like that’s my problem anymore. I barely even think about Yasha and the quest he went on. I’ve got my whole life ahead of me. I’m not sure I can say the same about him!