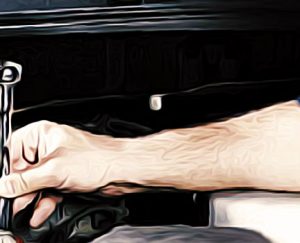 There are ten minutes until the draft! The suspense is absolutely killing me. I want nothing more than to be walking around the cars and making my decision, but we’re not allowed to until the gates open up. I’m currently sitting here talking smack with the people in my competition and trying to suss what cars they want. We’re allowed to actively talk about which cars we’re going to draft, but no one does. No one wants to say a brand/make/model and then give someone the opportunity to consider that same car. I am trying to get information out of my competitors but they really aren’t budging.

The one advantage I have is that I have really worked hard this off-season to study what type of regular car maintenance is most important to keep a car running smoothly. That way I’ll be able to look at the car descriptions, logbooks and service information and make relatively informed decisions on which cars are most suitable for me. So many people think that cars are all the same. That is absolutely not the case. All cars are different and will run better depending on how often they are serviced, how they are driven and how old they are. Okay, enough with the back story and the context. The draft is about to happen! I’ll let you all know how it goes shortly.

The draft went fantastically! I made sure to only draft cars that were issued with a car safety certificate local to Raceview because that’s where we will be racing. Racing isn’t always accepted in the local community, which is why it is so important to make sure that the cars I’m driving are considered roadworthy. That way, if I get picked up by any authorities, I am in the clear. My competitors, however, may not have thought that far ahead which may come back to haunt them.