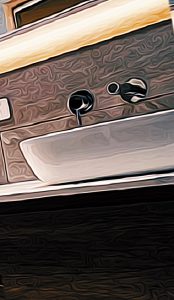 Picking up from where I left off on my last blog post, construction had just been halted and my kids were without a shower and a bathroom. It was bad at the start having to share a shower between the four of us, but having to share a bathroom as well was a pain. I say it was, but I mean it still is. As I said, this has been the longest bathroom renovation ever. As I also said, it’s not the bathroom renovation company’s fault.

I’ll tell you what was so laughable? At the beginning when the shower floor fell through, I thought it could be fixed by a professional shower grout repair. Oh how wrong I was. As it turns out, it needed to be such a big job because the floor underneath our shower and bath has rotted. Apparently, the shower had been leaking for years which has caused the wood beneath the bathroom to slowly rot away. It’s a bit of a disaster really. I’m quite shocked and disappointed that the insurance company rejected our claim.

Anyway, construction is allowed again now but it’s been held up because the vanity I ordered from interstate hasn’t arrived yet. I feel bad for holding up the bathroom designers. In the Melbourne area, quality designers are hard to come by and I’ve managed to secure some of the best. And now I’m holding them up. They’ve been really good about it and are doing other jobs in the meantime, but it still isn’t good. It doesn’t help that my kids are on my tail trying to find out when the bathroom is going to be ready. I’m only one woman organising this whole thing with no help from my husband.

I guess I just have to hope that the vanity arrives soon. Once it does it’ll be all systems go – I hope… I guess only time will tell.