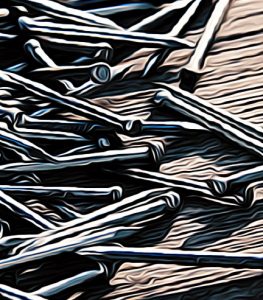 ​​‘How high do you want it to go?’ I asked my son, picking him up and slinging him over my shoulders. I walked him over to the tree — giggling and slapping at my arms — so he could point to how high he wanted his treehouse to be.

‘Here!’ he cried out, pointing to a spot about fifteen feet off the ground. I raised my eyebrows, impressed; the kid had ambition. Still, I could feel his mother preemptively shaking her head behind me, so I gestured to a place on the trunk that was a little closer to the ground. He didn’t seem the least bit troubled by the change, and I breathed a sigh of relief, having braced myself for a difficult client.

I set him down and he disappeared back into the house.

‘Well then,’ I said to my visibly-anxious wife, ‘looks like I have to take a trip to the local hardware store. Cheltenham has that bakery you like, doesn’t it?’

‘Are you sure you know what you’re doing?’ she asked, rubbing her knuckles.

‘Fair point,’ I grinned. ‘Look, I promise it’ll be sturdy. Tonnes of wood. And a big, huge, railing. Basically, another wall.’

She grumbled at my joke, but accepted a hug. ‘And you’re sure — you’re really positive — that it’ll be safe?’

‘It can’t be that hard,’ I rolled my eyes. ‘It’s just some nails and a few basic timber supplies. Cheltenham’s store should have everything.’

‘Instructions?’ she muttered under my armpit.

‘You don’t think I can do it?’ I feigned being hurt, taking a step back from her. She grimaced and placed her hands on my shoulders.

‘I think,’ she picked her words slowly. ‘That you’ll definitely be the first person up there. And if I see it wobble even a little bit — you’ll be the only one up there.’