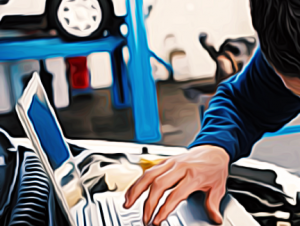 “Tell me what happened again. Just to make sure we have all the details right.”

The woman was clearly exhausted from an entire afternoon of questioning, but even if this was a diversion from the Conclave of Mechanists, they couldn’t miss a single detail. Maphira placed a hand on the receptionist’s arm, hoping to offer her some sort of comfort to get her through another retelling.

After hours at what the locals deemed the best Milperra mechanic for repairs, Maphira was more than ready to go home. She stifled a yawn and pushed her exhaustion down. Just one, final check before their investigation was done.

“Yes, of course,” said the receptionist. “Well, at about 2 pm, a couple of men in silver trench coats entered the shop and started looking around. I asked what I could do to help them, and one answered that they needed urgent brake and clutch replacement, while the other asked what to do if your car battery dies. I thought that was a bit suspicious, and they must have noticed my nervousness because they asked if they could see the manager immediately.”

Maphira looked to Vai, wondering if she had picked up the same inconsistency in the story. Her partner gave the slightest flick of her thumb as she continued checking her notes, confirming Maphira’s suspicions.

“I got the manager. He told me to wait in his office, but I decided to listen in on their conversation anyway. The men threatened him and said that if he didn’t join the Conclave of Mechanists, he would be punished. He told them to get out and they did, although they caused some damage as they left.”

They thanked the receptionist for her time and left the auto workshop.

As they climbed back into their car, Vai said, “She’s lying right? Her story changed.”

Maphira shook her head, disappointed that Vai would make that assumption. “Liars don’t change their story. They rehearse one and stick with it.