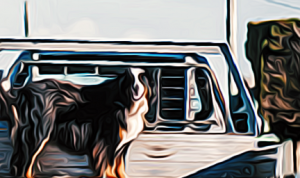 Maphira and Vai left the coffee shop, excited about their newest lead. It wasn’t often they got clues as awesome as this, so they’d have to make the absolute most of the experience. It was why Maphira became a detective in the first place – for cases like this.

At the back of the coffee shop, they found a box with an old phone resting atop it. Unfortunately, it was behind a gate with a padlock. Fortunately, that was exactly what they’d been hoping for.

Once they had broken the padlock, Maphira picked up the phone. Realising she didn’t have any idea what number to call, she looked around for further clues. On the ground, she found a flyer for aluminium ute canopies, suspiciously laminated and glued to the cement.

She dialled the number on the flyer, unsure if it was what she was supposed to do. She was met by an automated answering system, funnelling her through several questions. Maphira answered them as if she was completely interested in ute canopies. Eventually, an actual human woman answered.

“Hello. By your answers to our questions, it seems you are interested in purchasing a product from our business that sells ute tool boxes near Melbourne. Is that correct?”

The woman paused. A moment later, a man spoke in her stead. “A black car will approach Ley’s in five minutes. Get in. We have valuable information on the Conclave of Mechanists which we are willing to give you.”

The man hung up, leaving Maphira and Vai standing silently in the alleyway.

Maphira pulled out her own phone and dialled the Captain’s number. “We’ll have the others listen in, just in case something goes wrong. But if these guys are genuine, we can’t pass up this opportunity. We have to risk it.”

“Agreed.” Vai placed a hand on Maphira’s shoulder. “We’ve got this.”